Impact: Kirti drew inspiration from a real-life incident for her capstone project that warns people of the accident-prone locations in cities and towns.

She implemented AI, insights from surveys, data with respect to road-lands, rate of vehicle production, accident prone zones and more, to make the project a success.

The learnings from the program, particularly on Python Libraries, helped her clear an interview at TCS. The program encouraged her to learn, grow, and give back to the society. 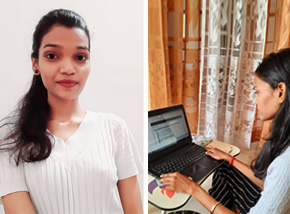 Do you believe that experiences have the power to determine our intent and consequent actions? We have a heartwarming story of a student from the TechSaksham program who found purpose in one of her teenage experiences and used it wisely to make a difference. Meet Jharkhand’s Kirti Mandal, a final year student at GEC, Bharuch. After reading her story you’d agree that

Life can only be understood backwards; but it must be lived forwards.
– Soren Kierkegaard

Skill is the unified force of experience, intellect and passion in their operation.
– John Ruskin